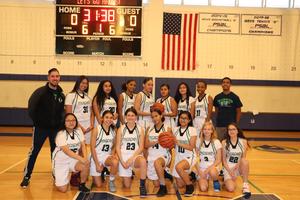 "It’s been a solid team effort", Coach Mustac
The Maspeth HS Girls JV Basketball team has come out to a flying 2-0 start with solid victories against Bryant HS by a margin of 71–18 and Metro HS by a margin of 58-15.
The team has been led by co-captains Cindy V. (22 ppg) and Ashley R. (4 apg) along with solid contributions from Tenzin N. (19 ppg) Jackie O., Mara R. and newcomers Olivia E. and Paris B. (6.5 rpg). However, do not doubt the team effort.
When asked how the team has been able to put together such great wins, Coach Mustac had this to say, “It’s been a solid team effort here at the start. The girls are constantly pushing each other to be better and know that they can be better. Consistency and commitment is what’s preached during practice and during games. I think the big thing here is that we believe in each other. It all starts with a belief. I constantly tell the girls to believe in the process, in the coaching and in the hard work and the positive results will follow.”
Next up for the team is a big matchup against Grover Cleveland HS on January 2nd at Maspeth HS. Come out and support the team!