Future, Past, & Present: In the Eyes of MHS's Brightest 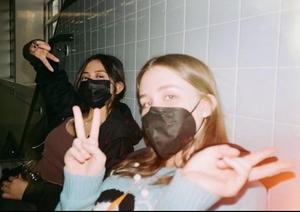 As students, the last couple of years have been hard, between the normal trials and tribulations of teenage angst and the turbulence caused by the COVID-19 pandemic. Nonetheless, two resilient seniors, Veronica Witkowski and Marlene Perez Sanchez, have prevailed. They are the honorable Valedictorian and Salutatorian of Maspeth High School’s Class of 2022.

Both Veronica and Marlene have decided to continue their education by pursuing college. Veronica, our valedictorian, will be attending MaCaulay Honors at Hunter College, where she plans on studying Biology. Marlene, salutatorian, will be attending Hunter College and plans on studying Psychology. Both girls have declared that attending Maspeth High School impacted their decisions on what to study. Marlene felt that the environment of our school has shown her that she wants a sociable career, and that it is okay to not be completely sure of what you want. Similarly, Veronica described that the openness and honesty of our teachers to discuss their life decisions has made her feel better about being undecided. Often High School students feel as though they must make a definitive decision on their lives before college. Veronica and Marlene represent the brightest of the school and they prove that being undecided is perfectly okay, and support the notion that you can discover truths about yourself and your future career in college.

Veronica feels that if given the opportunity to go back and change things during her time here, she would not make any changes. “Everything has brought me here, today.” Marlene agreed that she was mostly content with her decisions, but added that she wished that she would have enjoyed her social life more during her freshman year.

Maspeth was Veronica’s first choice of High Schools to attend, however Marlene’s first choice was Bard High School Early College. Even so, Marlene remembered that she had been excited to attend Maspeth. They agreed that their favorite thing about Maspeth compared to other schools was the cleanliness and infrastructure of the school, including the big windows that invite natural light into the building. Both girls felt comfortable in the school environment because of the friendships that they had made and the support of the teachers. Marlene added that she could envision lifelong friendships with people whom she’d met here.

Veronica and Marlene both have advice for current High School Students. Veronica has said that current students should not take themselves too seriously, but try to maintain responsibilities that would set themselves up for the future. Marlene mentioned that grades are not everything, and that you should appreciate the little things now because life will get ‘hard and real’ very soon.

Many people set established goals for themselves going into High School. Marlene and Veronica both set their goals during their High School career. Marlene set her goal during her freshman year, and immediately desired the Salutatorian position; which of course, she achieved. She was empowered to set this goal because the High School environment made her feel more pressure to get high grades compared to middle school. Veronica didn’t set goals until High School and feels that she has achieved most goals that she set.

Marlene’s favorite memory of her time at MHS was the relationships that she formed with teachers who had life experience and wisdom to give their students. Veronica’s favorite memory of her time here was in her words, “The unexpected good of seeing the beauty in people you may not have normally spoken to.” Veronica backed this up by advising that you should not set such a harsh expectation and just enjoy things for how and what they are.

Both the valedictorian and salutatorian are nervous about the upcoming changes in their lives. Marlene described High School as a secure, safe environment and is confident in the basic routine that High School provides. She is worried about the new freedom and pressure to pick the right path, but she admits that it is a good change and she knows that things will work out eventually. Veronica agreed that she is afraid of change. She doesn’t know what to expect in college but is hopeful that things will work out the way that they are supposed to.