The Unbreakable Bond Between Humans and Their Pets 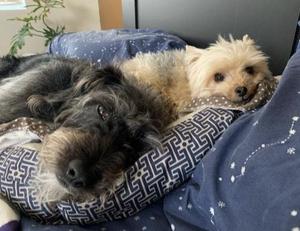 By Sofia Guzman, Staff Writer
Pets are a huge source of joy and excitement in our lives. That is something that nearly all pet owners– students, teachers, and parents alike– can agree on. But what is it about our furry friends that gives them a special place in our hearts and in our lives? Let’s meet some of Maspeth’s teachers; adorable pets to find out! Over the course of two weeks, I interviewed three teachers and learned about five dogs and one rabbit. It seems that pets are so important to humans that having just one is simply not enough! This might be because of the tremendous health benefits of having a pet.
Pets, especially dogs, need physical exercise in order to stay healthy. As a result of this, the owner incorporates more exercise into their own routine, thus improving cardiac function, and overall physical fitness. This is evident as Mr. Cretella, who teaches Latin in Room 304, stated that he enjoys playing fetch and going on walks with his seven year old Shih Tzu, Norman. Walking, even for just thirty minutes, is surprisingly one of the most beneficial exercises out there and oftentimes, people can’t find the motivation to go out and do it. Having a dog, however, forces you to be active.
Pets also provide a great benefit to our mental health, which is just as essential as physical health. Unfortunately, stress is an inevitable part of everyone's life. An excess of stress can deteriorate your health. Luckily, our pets provide us with comfort and companionship that makes it easier to manage stress. Mrs. Fadul, the English teacher in Room 402, owns two Malteses— six-year old Linus and one year-old Izzy. She also has a rabbit named Roggie who is roughly 8 years old and likes to chew on books on her shelf. Mrs. Fadul described how her pets are very excitable but they provide her with a sense of “relaxation.” They are all very affectionate and pick up on her energy. If she feels down, Linus senses it and goes over to comfort her. Mr. Cretella mentioned the same thing about Norman. It was surprising to find out how empathetic animals can be. “Empathy is one of the most important characteristics a human can possess,” Mrs. Fadul mused. She advised that to learn and feel empathy, you must spend time with an animal. The solace that pets give us is scientifically proven to ease loneliness and depression, reduce anxiety, lower blood pressure, and improve cognitive function. Overall, pets just make us happy! Though I personally don’t have a pet, I know that my mood is boosted every time I spot Eli, Maspeth High School’s comfort dog, in the building.
Animals, especially dogs and cats, have been adored by humans for a millennia. To pet owners, it seems that they have adopted human characteristics as a result of being around us for so long. Two teachers describe their dogs as “grumpy old men!”
Pictured are Mrs. Lara, the art teacher's dogs, Wolgang (left) and Ruby Van Halen (right), named after the 70s rock band. Ruby is a Yorkshire Terrier and the first one adopted into Mrs Lara's home. “She is a Sour Patch Kid,” Mrs. Lara jokes. Ruby is quite growly and acts mean towards strangers. She softens up quickly, however, and turns out to be very loveable. First sour, then sweet. Mrs. Lara also describes Ruby as “sassy” and calls her the “Queen of the House.” Wolfgang, on the other hand, is a skittish Schnauzer and Labrador mix. He is a rescue dog whom Mrs. Lara found during a 5 mile marathon. “He is a loveable doofus,” she observed. She describes his character as a cross between Rex from Toy Story and Patrick Star from Spongebob. Wolfgang is seemingly afraid of everything, especially car rides, but he loves the beach, cuddles, and Mrs. Lara’s baby son. The bond between Mrs. Lara and her pets is strong, as it is with most pet owners. We tend to equate our pets with family or others we are close to. It’s no wonder that pets are often involved in the milestones of our lives. For example, Ruby was the ring bearer at Mrs. Lara’s wedding, an important role typically given to family or a close friend. The rings were tied to a lovely pearl collar that she wore for the occasion. You'd expect Ruby to flaunt down the aisle, being as sassy as she is. Surprisingly though, she got nervous and a friend of Mrs. Lara had to carry her down the aisle to deliver the rings. Mrs. Fadul, on the other hand, draws a contrast between her pets and her students, whom she feels close to. She shared that it is difficult to get upset with her pets and like students, they have a “predictability” about them. Her rabbit, Roggie, is “like a teenager.” She explained how any slight disruption in his meal routine makes him upset. He shows this by running away from her, thumping his foot, and snorting like a pig. He comes around eventually, though and seeks out Mrs. Fadul to sit in her lap.
The bond between humans and animals is one to be cherished and appreciated. While long-lasting relationships between humans are complex and sometimes hard to find, pets are sure to stay by your side through thick and thin. We provide for them, and they give back their love and loyalty and that is truly a beautiful thing.