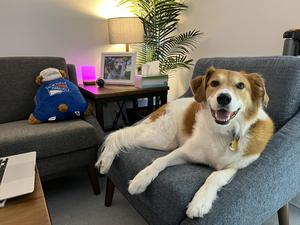 One extraordinary way in which the students at Maspeth High School are at an advantage over those of other schools, is that we have the benefit of our very own comfort dog. Meet Eli, the dog who has stolen all of our hearts.

Eli is a part of the NYC Comfort Dog Program, which has placed 75 dogs in NYC schools for the benefit of student’s emotional health. Approximately five of these dogs are in high schools, but the rest have all been placed in middle and elementary schools.

Eli and his owner, Mr. Blauner trained to prepare Eli to become a therapy dog by the Good Dog Foundation. The Good Dog Foundation provides certified therapy dog teams to over 200 facilities in New York City. It is the largest certifying animal-assisted therapy organization on the East Coast, and ‘The Good Dog Difference’ has been instrumental in teaching students to read, conducting anti-bullying workshops, and making life easier for children who struggle with autism. Additionally Good Dogs help people to cope with AIDS, Alzheimer’s, PTSD, heart disease, strokes, cancer depression, natural disasters and other traumas.

As Eli got older, Mr. Blauner noticed that he was gentle and calm, and had the right temperament for an important role such as this. Mr. Blauner felt that it would be simple to integrate Eli into his job and would be able to help students. When asked how he felt that Eli has helped students, Mr. Blauner observed, “He helps students with emotional support and to feel more pride in school.”

The Good Dog foundation gave an evaluation in which they determined that Eli would be a good fit to be a therapy dog. The class for therapy dog teams is three sessions long, and over the course of these sessions, Eli was assessed on his abilities, and Mr. Blauner was assessed on being a handler. The third and final class was unfortunately held off for over a year, due to complications involving the Covid-19 pandemic. As a result, Eli’s therapy training was delayed. The Good Dog certification that Eli and Mr. Blauner have earned allows them to volunteer at hospitals, prisons, nursing homes, and of course, schools.

Mr. Blauner revealed that it was hard to judge the difference that Eli has made because everything has changed since Eli has arrived, as a result of all of the unpredictability that the Covid-19 pandemic has sparked. However, he has noticed that students are excited and feel good when they see Eli in the halls. Mr. Blauner has also observed that Eli’s presence makes students more open, honest,and comfortable to share details of their lives with Eli even after having difficulty speaking prior to Eli’s arrival. Mr. Blauner believes that Eli has helped students socialize and feel better about their school community, as having a comfort dog in your school is an uncommon privilege and a shameless brag to students from other schools.

Eli has certainly made a difference at Maspeth, as described by two students, Ninth-Grader Ammie, and another student who has preferred to stay anonymous. Ammie told me about her experiences with Eli. Ammie spoke fondly of her own family dog and compared Eli to the family dog. She said that she was going through a tough situation and that both Eli and her own dog were comforting to her, and reminisced about the personal connection she felt towards Eli. “Even though he’s not a person, his presence makes you feel like everything will be okay because there is someone who is there for you”, Ammie affirmed. The anonymous student and Ammie both agreed that Eli has gotten them through hard times, and that his company is comforting and make them happy to see around the building.

Mr. Guditus also spoke to the addition of a therapy dog in the building. He said that he has noticed a positive impact and that even having a dog at all is really great. Mr. Guditus likes having a dog in the building, he is enjoys dogs overall and he feels that Ei helps students a lot. He has also noticed that students and teachers are both very excited about Eli’s presence. Mr. Guditus felt that the best way to utilize the therapy dog program would be to increase access to the dog with students as much as possible.

The addition of our comfort dog at Maspeth High School has been a welcome and impressively helpful addition to our day to day lives. We love Eli and are so excited to have him around.