A Day in the Life of Mr. Mario Matos 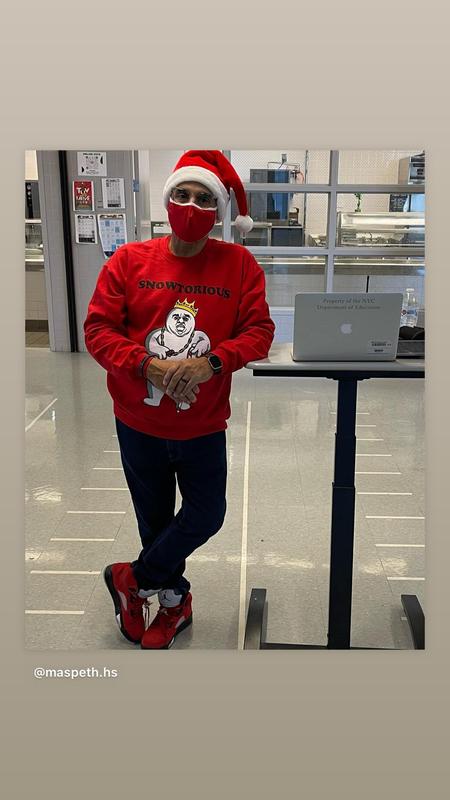 Maspeth High School was founded in 2011, since then, our staff that has been crucial to the overall success and development of us as an educational institution. One of those staff members that are to be credited is Mr. Matos. Matos is credited to be an AP Coordinator, BRT Leader, Community Liaison, Enterprise G Suite Liaison, School Treasurer, School Point of Contact, Social Media Specialist, Webmaster, and Yearbook Advisor.

Through all of these predominant responsibilities, Matos is able to well balance his duties as a major component to the Maspeth High School community. When asked about the management of his schedule. This is what he had to say:

“It is not easy. I had a number of students who helped with some of those activities. I did have students in the past who helped out with maintaining the websites. We had a media team as a club. The members would help me take care of posting and getting pictures of student life.”

Unfortunately due to COVID, Media Club has been at a standstill. Students that would be recruited for the Media Team would eventually progress into the yearbook committee their senior year, however, that is not an option we are able to indulge in anymore. Mr. Matos did express that, fortunately, in the past year Ms. Andres has expressed interest in the yearbook committee, this school year, Ms. Andres is taking charge of yearbook duty. Matos is happy to give the reins to Ms. Andres and advise her throughout the process. Nevertheless, Mr. Matos' current priority is helping with raising money for the 2021-2022 school yearbook. So far the yearbook committee has been able to raise approximately $2,000. The present goal is to raise $25,000 by the end of the school year. The committee has around $17,500 collected and or committed, when Mr. Matos raises $750 more, his personal goal will be met. Needless to say, the yearbook committee has made an impressive progression. Mr. Matos is confident that they will be able to reach their final objective by the end of the year. Mr. Matos is also encouraging the graduating class of 2023 to commence the raising money process, as well as the process of gaining business connections.

Out of the many responsibilities Mr. Matos has, it can be acknowledged that his favorite has to be cafeteria duty. “I get to see just about every student. Everyday. It gives me a chance to be available to answer a lot of the questions that students have.” Matos voiced that the best part of his job has to be interacting with students outside of a classroom environment. It allows him to be carefree and have conversations with students that are not limited. However, with outstanding

joyful moments arise troubling times. The moments when Mr. Matos has to communicate to students that they have been in close contact with a person who had tested positive for COVID-19, these students then have to be informed that they are required to quarantine. This has to be the worst part of Mr. Matos’ job. Reactions vary and not many invoke happiness. Situations like those are unfortunate, especially since families have differing circumstances and struggles.


Mr. Matos arrives at school at around 7:15 A.M. Since Mr. Matos is the School Point of Contact he deals with the necessary behind-the-scenes concepts. Concepts such as student email accounts, and ensuring all Google classrooms are up and running, if Google classrooms are not functioning, Mr. Matos is in charge of fixing it. When Mr. Matos settles down in the morning he sets up throughout the week by sending various messages to parents and sending newsletters. Mr. Matos is also ensured to update the emails and PupilPath accounts of students who have transferred into the school and students who have transferred out of the school. As soon as the first-period bell rings, when the principal and the assistant principals have gone upstairs, Mr. Matos is out in the main lobby checking students in, making sure everyone has completed their health screening and making sure that issues such as student ID’s and swiping in are going smoothly. After checking students in, Mr. Matos is in charge of notifying students and parents about any potential and or confirmed COVID cases. Every email, every phone call that is directed towards parents, students, and the Department of Education (DOE) is Matos’ responsibility. Once that is done in the mornings, if Mr. Matos gets a chance to have free time, he spends it by reaching out to club and sports advisors. There are times where clubs and teams need fundraising and so Matos takes care of that. He also reaches out to teachers to talk about activities that they can and can’t do. Mr. Matos also makes sure to deposit money for student organizations, and collects dues, the school website is also under Mr. Matos’ supervision. Then Mr. Matos goes to the cafeteria for four lunch periods to make sure everything is functioning properly. Mr. Matos assures that staff in the serving area are ready, and are available to serve lunch to all students. Additionally, to make students feel more comfortable Mr. Matos plays music.

Outside of school, Mr. Matos enjoys cleaning up leaves outside of his house and catching up on Netflix shows. At the moment he has finished True Story. Mr. Matos enjoys watching political thrillers and watching movies. One movie that Mr. Matos could never get tired of is the Jason Bourne franchise.

Mr. Matos’ favorite quality about his persona has to be his willingness to help. Matos first arrived at Maspeth High School in its first year of establishment. “I came from a school that was very difficult. When I look back, there were things that were not done well. I wanted to be a part of a place where good things would always happen. That is the case here, students are here after school, they’re involved in clubs and teams, we didn’t have that where I came from. In the previous school, the closing hours were 3:00 P.M, teachers wouldn’t stay after school, they were there to do their jobs and they were gone. So when I say that I overextend myself it’s because I believe that things need to get done. Even if it’s on the weekend.” Matos had received a phone call on a Saturday from the Department of Education where he was informed that there was a positive COVID case. “It’s Saturday. I don’t work Saturdays, but I could not in good conscience say to myself or to anyone else that it was going to have to wait until Monday. That’s not what I do. When situations like that happen during the weekend, I have to jump into action and start doing whatever it is that needs to get done. It cannot wait. It’s a sense of responsibility.”

When asked about his goals for the next upcoming five years, Mr. Matos expressed, “In five years, hopefully, I am still here, waiting for 11th graders to come back and express to me how they have graduated from college. I have been around for so long, that a lot of the things that I have wanted to do, I have done. I’ve had the time. I’ve had the means. Believe it or not, sometimes the goals that I think about are centered around this school. One of them has always been for this school, the students, and the parents to be a political force. That when the school president reaches out to an elected official, the elected official is going to call back. That when the PTA says we have a PTA meeting tonight, can you be here? The elected officials say, I will be there because I would hope that they understand that the parents of Maspeth High School are important. That the students of Maspeth High School are important, and how they need to be heard regarding whatever they have a concern about.”

and somehow throughout the City of New York, High School students got the word. We walked out of school to make a point. PSAL teams were so important to us that we marched outside the building, and made noise about not cutting PSAL. To me, that was such a defining moment where we were all united on a particular issue. It didn’t matter if we were freshman, sophomores, juniors, or seniors, it didn’t matter what nationality we were.” With the sharing of such a strikingly beautiful experience, Mr. Matos gave advice to current high school students,“ If I were to tell students to try to define themselves at some point, it is to unite on a common theme that affects all of you. There may come a day where somewhere, somehow, somebody is going to decide to cut money towards schools. If that ever happens then that is the time to rise up and say something.” Mr. Matos shone a light on a similar situation that had occurred in Maspeth High School where a group of students, a few years back tried to recruit more sports teams for boys. “The students rose up and took a trip to Albany where they started a petition. Ms. Jurek, was the student body president and she took all of the petitions that students signed, and then presented it to the elected officials. Students went as far as to send emails to the chancellor. We ended up getting someone’s attention because someone wrote back to one of the students regarding that as

well.” An exemplary moment where students united against a common cause, used their voices, and marched towards victory. Matos continued, “There are around 1,100 students in this building. 1,100 people have a lot of power. What we did back then was that we got everyone motivated to just start sending emails. I know people are afraid to pick up the phone, dial, call someone and say things, but it's easier to do things by email. At the point that we are now with social media, a message can be very powerful. I think that when the time comes and the student body needs to put a message out there, social media is going to be a big influence.”

If Mr. Matos had the chance to go back in time, he would advise his younger self to try harder in Algebra, to have taken the regents again, and to just try his best to pass the course. He makes a

strong emphasis on this because it led his college courses to be delayed due to having to take remedial classes. However, when asked about his younger self, Mr. Matos hopes that he would be proud of how long he has come.

Reasonably so, he should be proud. Mr. Matos has been a critical part of the flourishing of the Maspeth High School community and has completed a lot during his lifetime. Through it all, he has remained amicable and diligent, while still being able to manage all of his responsibilities, and engage in other activities. Matos is an example to follow, and all he does is greatly appreciated. The school community would undoubtedly not be the same without his presence.