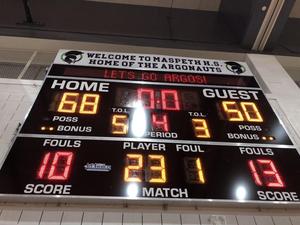 Boys team tops Aviation 68-50
The Boys JV Basketball team won their first game of the new year defeating Aviation HS by a score of 68-50.
The team was led by Tommy C. double double with 16 points and 30 rebounds. They also received a clutch 2nd half performance by Co-Captain Aidin D. who had a team high 19 points. Jason G led the team with 9 assists to pace the boys all game.
Come out and support the boys during their next home game on Tuesday, 1/7/20 vs Queens Tech HS @ 430pm.
Print