Look Out, World! A Change is Coming! 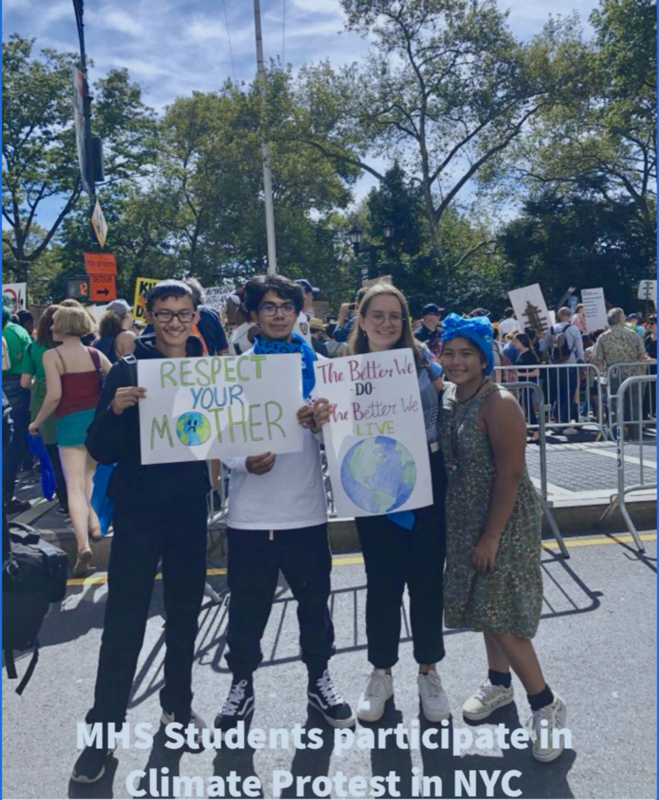 On Friday, September 20, 2019, there was a strike held for Climate Change. It is said that more than 130 countries participated in this event. Many people are angry about the lack of progress on climate change and they want their voices to be heard. Many students in New York City went to a strike near Battery Park to make their voices heard.

The purpose of the climate strike was to demand climate justice, and to get this issue to our world leaders, to save not only our future but to save the future generations.

The Mayor may have allowed students to attend the strike, but unfortunately this rule doesn’t apply to teachers. The D.O.E (Department Of Education) has a policy in which teachers aren’t allowed to attend political events during working hours, but the doesn’t mean they don’t have their own opinions on climate change.

I recently asked Mr. Bell, a teacher and the advisor for Green club, a few questions regarding the climate protest, and climate change more generally:

Q: Would you consider yourself an environmental activist?

Q: What are your opinions on the actions of Greta Thunberg has done so far?

A: I think she is a true climate hero. I think that she is changing minds across the world and I think that the voice of a teenager here might be the only voice that altars the opinion of adults that have a fixed mindset.”

Q: Do you believe that the message of the protest was clear and was shown?

A: “From what I can tell it looks like a very involved and productive protest.”

Q: The D.O.E has a policy in which teachers couldn’t attend the strike. Would you have gone to the strike otherwise?

A:“Yes, we actually had a field trip form signed and 10 Green clubbers were planning on going with myself and Miss. Jawaid, but we were not able to attend with the students.”

A few members from Green Club who attended the climate change protest answered a few questions for me:

Q: What made you want to attend the strike?

A: “I’m really passionate about environmental justice, so the moment the strike was organized I knew I wanted to participate. The image of people from all over New York especially the youth protesting for what they believe in is really powerful, and I knew that I wanted to be a part of that experience.”

Q: When you arrived were you surprised by the amount of people?

Q: Do you think the mayor's decision to allow students to miss school and be marked absent was a good decision?

A: “ I think it was a good idea for students who are passionate about climate change, and want it to be taken more seriously rather than being questioned.”

Q: Do you think this strike is causing people to take action now?

A: “I hope it does! I think this strike told people to start taking action now. More specifically towards world leaders. They need to start switching over to sustainable methods and enforce policies to protect the environment rather than harm it. This strike also showed the world listen to science, and stop being skeptical of climate change is a real issue.

Q: Do believe our earth has already past point in which we can’t return?

A: “I think that if we keep going down this road, and continue having unsustainable approach on such a large scale. Also by just having really unsustainable lifestyles we will definitely face the consequences. However there is still time to make adjustments on the way we live. You could start small by becoming more conscious about your plastic usage or meat consumption.”

Q: If another strike is needed, would you attend it?

A: “I would definitely strike again because it felt very surreal. The energy that was present there was something that I never felt before in my life. There’s something special about being surrounded by people with similar interests. This event allowed our voices to be united, and express our concern for this prevailing issue we’re facing.

Q: What made you want to attend strike?

A: “Honestly, it’s because of Greta Thunberg. She’s only a teen and she’s already making big changes for our future, which made me want to take a stand with her as well during the climate strike.”

Q: When you arrived, were you surprised by the amount of people?

A: “The amount of people that joined the climate strike was unbelievable. I never knew that this many people really cared so much for our planet. It even surprised me that a lot of students had been at the strike early in the morning, and didn’t go to school that whole day.”