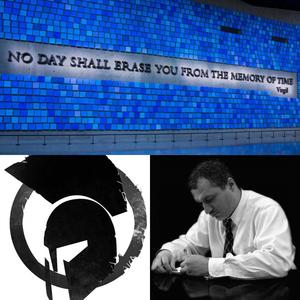 " . . . we share a moment of silence for the 2,996 innocent men and women who lost their lives at this time 18 years ago." Khurshid Abdul-Mutakabbir, Founding Principal
Good morning.

This is Principal Abdul. On September 11th, 2001, eighteen years ago today, New York City, the Washington DC and Somerset County, Pennsylvania areas endured one of most heinous terrorist attacks in modern history.
Two thousand nine hundred and ninety-six (2,996) people were murdered, approximately 6,000 were injured, and millions were traumatized. Over the past 18 years it it estimated that about 2,100 first responders, good samaritans, police, firefighters, volunteers and the rescue workers who braved ground zero on that day and in the days, weeks and months after the attacks, have died due to diseases directly caused by the toxins and poor air quality at ground zero. Every year we are witnessing more and more unfortunate illnesses due to the aftermath, and within two years it is expected that the death toll of the first responders will exceed the number of people who died on that day.

9-11 is a story of vile hatred and tragedy. So many innocent lives were lost and families were ripped apart. Conversely, 9-11 is also a story of Americans coming together, supporting each other, rebuilding what was destroyed and moving forward as a great nation.
Although many of us still hurt due to the losses and trauma we felt on that day we continue on as a country and city. We owe this to all of those who lost their lives on this day 18 years ago. We will not be deterred by those who resent us. We are strong just like the passengers on flight 93 who fought back against evil.
We are Americans.

At this time, I would like everyone to stand as we share a moment of silence for the 2,996 innocent men and women who lost their lives at this time 18 years ago.

We pledge allegiance to the flag of the United States of America and to the Republic for which it stands. One nation under God, indivisible with liberty and justice for all.